Aged Tyneham is a sedimentary Purbeck limestone which was laid down in the Lower Cretacious Period. 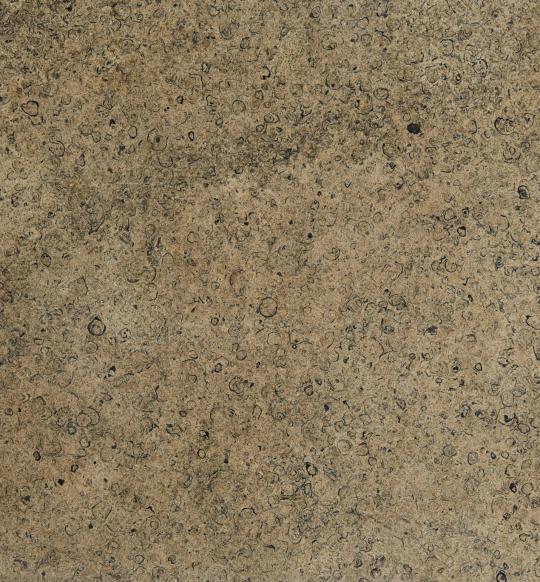 Found on the Isle of Purbeck in Dorset, it is currently quarried near the village of Langton Matravers. This stone was formed from sediment deposited in varied terrain from shallow freshwater to lagoons across this area.

Aged Tyneham has been quarried since Roman times and used locally as a building stone since then. The local quarrymen traditionally referred to it as the “grub bed,” due to the high fossil and shell content. It was well known for being the most durable of Purbeck stones with its consistent beige to blue tones, heavy shell content and the ease with which it could be polished to give a high sheen.

The first notable surviving use of Aged Tyneham was in the Church of Edward King and Maytr at Corfe Castle. This church was build to commemorate the Saxon king of England, Edward who was murdered on the instruction of his half brother Aethelred at Corfe Castle in 978AD.

It was also used in the lintels and the altar at Salisbury Cathedral and in various parts of Corfe Castle. It can be found in many traditional cottages in the area in such varied places as door steps, lintels, fireplace mantles – and of course, flooring.

The coming of the railway to the Isle of Portland meant it became possible to use the hard and durable building stone in other notable buildings across the country. It can be seen in the British Museum, Windsor Castle and Southwark Cathedral.

At the time of writing, there is only one quarry taking this historic stone. We are proud to offer this historic British limestone as part of our range and it can be seen on display in our Old Amersham and Tunbridge Wells showrooms.

Order you own piece of history to complete your look here.